Home Blog Special Events Thriving in Marriage: What God Has Joined Together 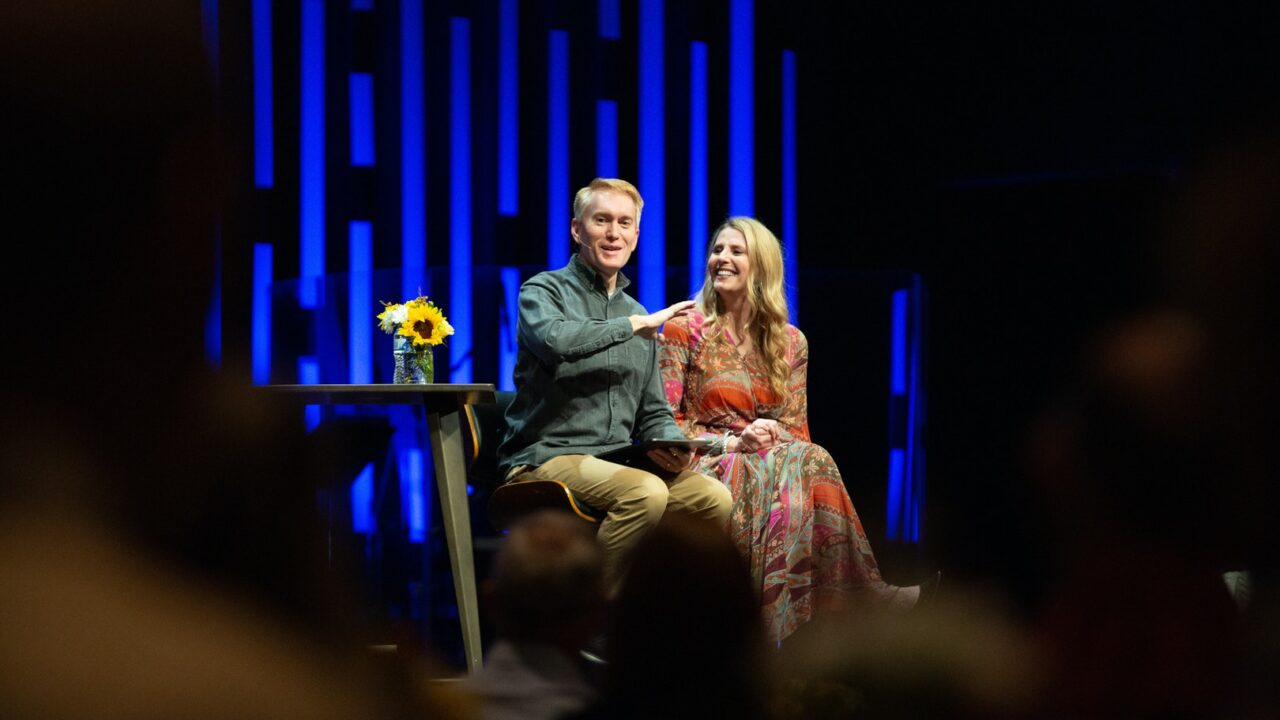 Thriving in Marriage: What God Has Joined Together

A Time to Thrive

US Senator James Lankford and his wife Cindy spoke to the couples at Brentwood Baptist’s annual marriage event Thrive: A Date Night Experience on November 11, 2021. The senator and his wife spoke on the topic of what thriving in marriage, that which God has joined together, truly looks like in light of God’s Word.

Beginning the event, Next Gen and Family Minister Linc Taylor opened up their time together with a word of prayer. In this moment of gratitude, he thanked God for these intentional moments they would spend together celebrating the gift of marriage.

A Night To Reflect and To Remember

A photo booth was set up just outside the entrance for couples to have their photos taken in commemoration of the evening’s festivities. The event space inside Hudson Hall was thoughtfully decorated for the evening, with vases of fresh flowers and tables for two arranged evenly throughout. In these spaces, each pair would have the freedom to engage in conversations meant for two.
Interspersed throughout the night’s program, discussion questions flashed on the screen. Women’s Minister Amy-Jo Girardier led each conversation starter. She reminded attendees that the goal was to simply initiate conversation with one another. She encouraged the room to turn from the interruptions and distractions that so often get in the way of intentional time together.
Their first question was simple: “When was the first time you knew you wanted to marry your person?” It was a time of sweet reflection as husbands and wives remembered their humble beginnings. They answered other questions regarding traveling, hope, and aspirations.

Puckett’s Grocery and Restaurant catered the evening with a full-course meal, and couples were able to enjoy a truly restful date night together, not worrying about the typical chores or childcare so often associated with a Thursday night spent at home or away for an evening.
Then, giveaways sprinkled the happenings of the night as attendees entered their names into various drawings to receive prizes. Puzzles and Starbucks gift cards were drawn for the end goal of quality time spent together. Larger prizes were awarded as well. Kayaking experiences, bed and breakfast gift certificates, and even a Marriott eGiftcard were given as much-needed getaway opportunities. One couple even received a houseboat dinner cruise on Center Hill Lake! The excitement of the evening only intensified as husbands and wives engaged in the anticipation of winning such thoughtful prizes.

A Minister and His Marriage

Next, Student Minister Mac Johnson then invited his long-time mentor onstage. He introduced Senator Lankford not as a politician, but as a minister who brings the knowledge and wisdom of one who has served in ministry for 22 years, a father for 24 years, and a husband for almost 30. Despite the many hats he wears, Senator Lankford declares that the covenant gift of marriage is one of greatest, most tangible ways that believers are able to grow in intimacy with God while also demonstrating His affection to a watching world.
He communicated his belief that others are observing the Christian institution of marriage to see what the Lord is doing. He views it as a call to the church to especially honor the Lord in their relationships with one another.

A Gift for Growth and Glory

The Lankfords believe marriage is a gift that grows us as believers, toward the shared goal of God’s glory. A healthy marriage, though, isn’t easy to achieve—we must cultivate it. They used a gardening metaphor to describe their experience of decades spent together: it’s about truly getting in the dirt. “You can’t plant it, then walk away, and say it’s all done. You have to fertilize it, and you have to water it… and you have to weed it,” the senator explained thoughtfully.
Mrs. Lankford created space for couples to reflect on some hard-hitting questions as they consider the state of their marriages and the growth they desire for themselves and their own families. She reflected on the role that truth, transparency, and honesty will inevitably play within a healthy marriage dynamic. “Do you still want to be married?” they asked the couples assembled in Hudson Hall. The senator remarked, “Your marriage is not going to be solid until you’ve settled that question. What God has put together, are you going to allow to separate?”

Senator Lankford shared his own context for entering into the marriage covenant with Cindy. He explained that divorce has marked the lives of so many in his family and circle of influence. Not having a role model to look to, he knew that steadfastness and devotion must mark the promises made to his wife, till death do they part.
But they followed up the heaviness of that commitment with an equally as important question to the audience gathered together at Thrive: “Do you want your marriage to be fun?” The Lankfords shared how, after decades spent knowing and loving one another, their time together has only grown in the fun they have living life together as one.

The Fun in The Faithfulness

Past all the routines and responsibilities delegated to partners in marriage, they reminded attendees that the fun that only comes after first establishing trust. They shared that how they maneuver the calm moments in this life sets the tone for how they manage the stressful seasons to come.
“You’re going to have more fun in marriage if you build more trust,” the senator said simply.  “It doesn’t happen by chance. You have to be intentional with it,” his wife added.
Their agreement went further as the basis of the covenant gift of marriage became clear: your individual relationship with the Lord impacts the way you relate to your spouse. The joy needed to weather the hard times stems from a life lived in step with the Holy Spirit. Reciting the heeding of the Apostle Paul, Senator Lankford recalled the words of Galatians 5:22-26. Like the gifts of the Spirit, the fruits of the Spirit are evidence of God’s work. This evidence, he noted, shines through in all areas of life, but especially within your marriage.

As Travelers with Christ

The session came to a close after a brief Q&A time. Throughout the evening, participants sent in questions for the Lankfords through the event’s Talk-to-Connect feature. Couples texted in questions regarding external pressures, careers, and family to which the Lankfords answered with kindness and care. We are all fellow travelers with Christ, the senator commented. And we have to figure out ways to strengthen each other.
Linc Taylor further emphasized the importance of living life in biblical community and its role within one’s marriage as he closed out the night’s session. He mentioned Brentwood Baptist’s various LIFE Group opportunities as well their Marriage Mentors ministry.
In all, those who attended Thrive: A Date Night Experience walked away not just with goodie bags filled with fresh coffee, treats, and helpful resources, but with encouragement and inspiration as they continue walking in the covenant promise they have made with one another as husband and wife together, that they would thrive.